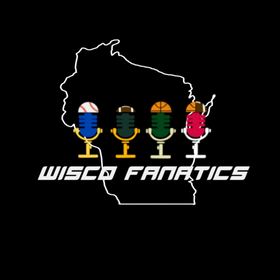 We're two best friends, Jake and Tyler, that love our Wisconsin sports teams, we do our sports show live every week so fans can join the discussion! Join us Fridays at 8:00 central time to talk about the Green Bay Packers and Wednesdays at 4:00 central time on Facebook and Youtube to talk Milwaukee Bucks, Milwaukee Brewers, Wisconsin Badgers football and basketball and more! We are seeking to improve the mindset of Wisconsin sports fans to a more positive and optimistic mindset by framing our analysis that way and looking for the positive takeaways and ways our favorite teams can improve. Twice a week shows, come join the discussion!

Do or die time for the Brewers, Badgers Week 2

Basics of football and basketball

Brewers hot out of the break, Packers first day of practice

Brewers/Pirates and Twins, some Bucks news

Brewers are slumping, are there positive takeaways?

Lots of news, some bad, some good, Brewers baseball and more

All Milwaukee Episode, Bucks and Brewers

Bonus Episode 2: Guys who weren't the same when they left their WI teams

Lots of basketball, Bucks and Badgers

Packers playoff preview, are we worried about the Bucks? Did we underestimate the Badgers?

The Wisco Fanatics recapping the Packers win over the Chicago Bears

Wisco Fanatics recap and preview Packers and Badgers, talk about the Brewers early exit and preview the Bucks 2021 season!

The Wisco Fanatics recap the Packers win over Pittsburgh, preview their matchup with Cincinnati, prime the Brewers NLDS with Atlanta, recap Wisconsin/Michigan and preview Wisconsin/Illinois

Kristen Brey of As Goes Wisconsin joins the Wisco Fanatics to talk about Wisconsin, then talk about the Packers last second win over the 49ers, welcome in guest Ryan Thompson of Steel-Town Yinzers to preview Packers vs Steelers, recap the ugly Badgers vs

Wisco Fanatics discuss the last week of Brewers baseball, prime Badgers football and update players to watch for the Packers in preseason.

The Wisco Fanatics inform about the new coordinators for the Packers

Packers are Back! Brewers are in first place as the deadline nears and we close out the Milwaukee Bucks 2021 season.

Our Milwaukee Bucks are Champions!!

Combat Sports updates with Curtis Johnson, NBA Finals discussion games 2-3, what Bucks need to do going forward and Brewers 1st half vs 2nd half.