As the world goes more virtual, it’s more and more difficult to keep making friends as adults —especially if you want friends who will bring energy to your life instead of drain it, friends with whom you can be honest, friends who have your best interest at heart, and ultimately, friends who turn you into a better version of yourself. If you’re the average of the five people you spend the most time with, then making friends is the number one self-development activity you can master.

After 800 episodes of the top-rated business podcast Build Your Network, Travis Chappell learned that networking is really the same thing as just making friends with people. In this newly rebranded show, Travis Makes Friends, it’s Travis’ goal to simply give listeners like you a chance to get to know world-class performers who can help you become a better version of yourself and share his connection secrets in the process.

If you want friends that push you to be better, then subscribe to the show and join Travis as he has conversations with world-class athletes like Shaquille O’Neal, entertainers like Rob Dyrdek, authors like Dr. Nicole LePera, former presidents like Vicente Fox, or even the occasional FBI hostage negotiator, billionaire real estate mogul, polarizing political figure, or controversial social media influencer. 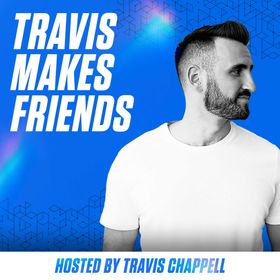 ARTIS GILMORE | How Basketball Has Changed

PAUL PIERCE | No Fear of Failure

KEITH YACKEY & JESSE MARQUEZ | Monogamy “plus”, Marriage and How to Get Your Ex Back

VICENTE FOX | Purpose, Leadership, and Rising to the Top

SHARRAN SRIVATSAA | Buying Businesses, the Future of Twitter, and Why He Hired a 6-year-old CEO

799: Justin Sloan | The Power of Diversification and Franchises

797: Natalie Dawson | How to Build a High-Performance Team

796: Michelle Seiler Tucker | How To Sell Your Business At Its Peak

794: Midweek Mashup | How to Be a Best-Selling Author ft. Max Lugavere, Mark Manson and Jack Canfield

790: Midweek Mashup | How to Care For Yourself ft. Dr. Nicole LePera, Lori Harder and Jefferson Bethke

785: Stu Heinecke | How To Grow Your Business Like A Weed