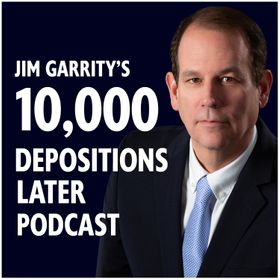 From Jim Garrity, the country’s leading deposition expert, comes this podcast for hardcore litigators. The subject? Taking and defending depositions.

Each episode is a one-topic, mini field guide, meant to educate and inform trial lawyers looking for world-class deposition strategies and tactics. Garrity includes a general discussion of the topic, specific insights and guidance, questions to ponder, and case citations to support his observations. They’re jam-packed with immediately useful advice and guidance.

Garrity has appeared as lead trial counsel in more than two thousand federal and state civil cases. His personal deposition experience now far exceeds the 10,000 mentioned in the title. (For business reasons, his publisher did not want him to update the title number.) He’s been up against the best litigators at hundreds of firms, from the nation’s largest to sole practitioners, and there’s literally no tactic, trick, variation or strategy he hasn’t seen hundreds of times. Indeed, one federal judge, commenting in open court, observed that Garrity “has pulled multiple rabbits out of multiple hats,” meaning he wins cases against inconceivable odds. How? Because of his extraordinary deposition skills. Depositions are the decisive factor in nearly all settlements and trials. You cannot achieve excellent outcomes if you cannot prevail in depositions.

Garrity is famous for his simple, keen observation: “Depositions are the new trial.”  Why? Because almost none of your witnesses will ever testify anywhere other than in a deposition. Yale University Professor Marc Galanter, in his law review article titled “The Disappearance of Civil Trials in the United States,” opened with this shocking statistic: “Since the 1930’s, the proportion of civil cases concluded at trial has declined from about 20% to below 2% in the federal courts and below 1% in state courts.”

So depositions are in fact the new trial. Except for a tiny fraction of your cases, the court reporter's office is the only place where your testimony will be taken and heard. And that is where your case will be won or lost. You can’t afford anything less than expert-level skill in the deposition arts.

This podcast, based on Garrity's best-selling book,10,000 Deposition Later: The Premier Litigation Guide for Superior Deposition Practice (3d Ed., 450 pp.; Amazon, Barnes & Noble), is a litigator’s dream, not only revealing cutting-edge techniques and procedures, but telling you how to combine them creatively and successfully. Learn how to gain advantage at every step. Learn the path to victory and learn where the landmines are along that path. Discover the legitimate (and illegitimate) tactics opponents use that you’ve never seen before.

The podcast is heavy on insights you can immediately implement. Regardless of your years of experience, the episodes will provide an astonishing advantage. And each episode contains citation to court decisions to support Garrity’s advice.

His expert guidance begins with the moment you first conceive plans to capture testimony – whether by deposition, affidavit or EUO (and he’ll tell you how to figure out which to use and when). Most importantly, he explains what he does and why. No part of the deposition process will be overlooked – forming the battle plan, scheduling, dealing with reporters, taking depositions, defending them, prepping witnesses to make them invincible, handling every conceivable type of witness, making objections, dealing with obstructive lawyers, and tips pertinent to deposition transcripts, from the moment of receipt through trial.

If you’re serious about developing killer deposition skill sets, subscribe to this podcast so that you receive each episode automatically in your feet as they are uploaded.

Episode 107 - Do Your Non-Party Subpoenas List the Remote Location as “Zoom Video?” You May Have a Problem.

Episode 105 - Dealing with Deponents Who (For Now) Are Asserting a Fifth Amendment, Spousal, or Other Privilege

Episode 104 - What to Do About Incomplete Answers Caused by Interrupting Examiners?

Episode 102 - Lessons From The Front Lines: When Suspending Or Terminating A Deposition in Progress Due to Misconduct, Don’t Forget to Say This

Episode 101 -When Are Responses & Objections Due to Document Requests Embedded in a Notice of Deposition Duces Tecum? When Is the Actual Production Due?

Episode 100 -Can You Limit the Duration of an Opponent’s Deposition Before It Even Starts? (Yes.)

Episode 99 -Does FRCP 30’s 7-Hour Limit Include Cross? What if the Direct Used the Full Seven?

Episode 98: "Have You Now Told Me Everything That Supports Your Claims/Defenses?"

Episode 96 - Lessons from The Front Lines: Hit with A Dispositive Motion Before You've Taken All Your Depositions? Do This (Immediately)

Episode 94 -What Five Things Should Litigators Be Doing More Of In Their Deposition Practice?

Episode 93 -Is There A "Best Place" to Sit When Questioning Deponents or Witnesses?

Episode 92 - The Deponent is Taking Notes While Testifying. Can You Demand Them?

Episode 90 - So What, Exactly is Impermissible "Coaching" During a Deposition?

Episode 89 -Lessons from the Front Lines: An Appellate Court’s Ominous Comment to Litigants Fighting Over a Transcript’s Accuracy

Episode 85 - Can You Bluff Dishonest Deponents By Implying You Have Evidence that You Don't?

Episode 84 - Does the Rule of Sequestration Apply to Depositions?

Episode 83 - Lessons from the Front Lines: Alex Jones' Lawyer in the Sandy Hook Case Reprimanded for Deposition Conduct. (He Should Have Listened to Episode #49.)

Episode 80 - Taking Depositions Before and After A Lawsuit

Episode 79: An Email Is Not a Notice of Taking Deposition (But It Could Be)

Episode 75 - Lessons From The Front Lines: Never Let Opponents Control the Timing & Sequence of Your Depositions

Episode 74 - Can You Read the Entirety of an Adverse Party’s Depositions at Trial, Even When the Deponents Are Available to Testify Live?

Episode 72 - Set Your Depositions Unilaterally After Asking for Dates…How Many Times?

Episode 71 - Lessons from the Front Lines: A Plaintiff Escapes Sanctions for Using Public Records Requests to Gather Information During a Discovery Stay

Episode 70 -Can Non-Record Lawyers Participate in the Depositions of their Non-Party Clients?

Episode 69 - So, What About Standing (a/k/a Continuing or Running) Objections?

Episode 66 - Something to Know About Our Show Notes: We're Constantly Adding to Them

Episode 64 - Proving "Unavailability" in Order to Use Depositions at Trial

Episode 62 -A Tool for Motivating Deponents to Reveal What They Know, Without Fearing Retaliation

Episode 61 - Lessons from the Front Lines: A Judge’s All-In-One Guide to the Right (and Wrong) Way to Make Deposition Objections

Episode 55: Lessons from the Front Lines: What Not to Do When an Entity Designates Just One 30(b)(6) Witness on A Large Number of Topics

Episode 50 - Do You Have A Predictable "Deposition Profile?"

Episode 49 - A Listener Asks: What if The Examining Lawyer Asks My Witness to Pull Out Her Cellphone and Disclose Texts, Phone Numbers, or Messages?

Episode 48 - For Your Research Files: New Decision on Deposing Witnesses Even When the Adversary Swears They Know Nothing

Episode 46 - Lessons from the Front Lines: What to Do When Your Opponent Notices Their Experts for Deposition Before You Do

Episode 44 - Objectionable Objections: "If You Know"

Episode 40 - Lessons from the Front Lines: I Bet He Didn't Think His Speaking Objections Would be Played for THAT Audience.

Episode 38 - Can More than One Lawyer for A Party Question the Deponent?

Episode 36 - Can an Entity Later Use Affidavits to Contradict the Testimony of Its 30(b)(6) Designee?

Episode 35 - Lessons from the Front Lines: Excellent Remote Deposition Protocols for Your Depositions

Episode 32 -Lessons from the Front Lines: Agreeing to the "Usual Stipulations" to Hold Objections Until Trial? You Still Have to Make THIS Critical Objection.

Episode 30 - How to Sharply Reduce the Cost of Deposition Transcripts

Episode 29 - Lessons from the Front Lines: Are You Entitled to Depose a Witness Previously Deposed by Another Party?

Episode 27 - Is It Okay to Confer with Clients About Their Testimony During Deposition Breaks?

Episode 26 - Lessons from the Front Lines: Regret Terminating a Deposition? UN-terminate It Immediately.

Episode 25 - Can You Be Sued for Questions You Ask in Depositions?

Episode 21 - Wizards and Codes: How to Precisely Track The Elapsed Examination Time During A Deposition

Episode 17 - Can You Ask the Same Questions In Depositions That You Just Asked (And Got Answers To) In Interrogatories?

Episode 15 - Remote Deposition Protocols for COVID and Beyond

Episode 14 - Lessons from the Front Lines: Asked and Answered Objections

Episode 13 - The Real Reason to Cross-Notice A Deposition

Episode 9 - Dealing with Cross Beyond the Scope in Depositions

Episode 4 - What is the "Right" Style for Deposing Witnesses?

Introduction and Welcome to the Podcast!