What Would Hayek Say? | RedCircle 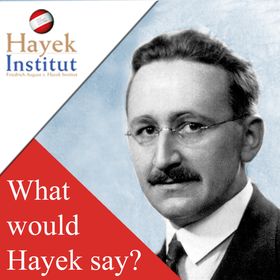 What Would Hayek Say?

"What Would Hayek Say?" is a series dedicated to applying the ideas and philosophy of the Austrian economist and philosopher Friedrich August von Hayek to current political problems.

Throughout his life Hayek shied away from offering a running commentary on day-to-day politics, preferring instead to maintain the philosophical distance necessary to contemplate serious problems with a profundity nearly unequaled in the 20th century. However, he was anything but unconcerned with the politics of his time. Hayek was one of the most vocal and cogent defenders of individual liberty and liberal democratic regimes against the various manifestations of totalitarianism in the 20th century, whether in their fascist, Nazi, Soviet, or socialist forms.

His commitment to individual liberty, equality before the law, and the civilization built on these principles is as relevant in the 21st century as it was in the 20th. With so much disorder in the world, Hayek's clear thinking, elegant prose, and generous spirit can help us think through some of the most pressing issues of our time.

If you have any suggestions for future topics you would like us to cover from Hayek's perspective, please let us know in the comments!