We Run The Night | RedCircle

We Run The Night

We Run The Night is a Shadowrun 6th Edition Actual Play featuring witty characters that will make you laugh, cry, and perhaps question your own morality. What would you do in the face of evil? For the un-initiated, Shadowrun is a science fantasy tabletop role-playing game set in a near-future fictional universe in which cybernetics, magic and fantasy creatures co-exist.

Episodes were streamed live on Twitch. Season 3 has officially wrapped, and a new game has begun! Catch JBrews live every Thursday at 9 PM ET at Twitch.tv/JBrews where we just started We Run The Stars, a Starfinder TTRPG Actual Play! 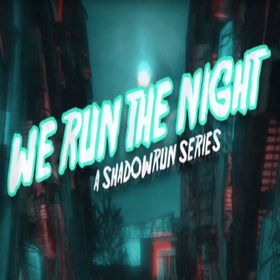 S3E16: The Devil Went Down to Aztlan

S3E13: Washed Up and Researched