Voyage of the Scarlet Queen | RedCircle

Voyage of the Scarlet Queen

Voyage of the Scarlet Queen was a radio drama portraying the adventures of the 78-foot ketch Scarlet Queen in the South Pacific. It was broadcast on Mutual from 3 July 1947 to 14 February 1948.

Each episode opens with an entry from the ship's log, such as: "Log entry, the ketch Scarlet Queen, Philip Kearney, master. Position -- three degrees, seven minutes north, 104 degrees, two minutes east. Wind, fresh to moderate; sky, fair..." with a similar closing: "Ship secured for the night. Signed, Philip Kearney, master." Arriving at an exotic port of call, the captain and first mate would go ashore and immediately run into trouble with local authorities, agents of rival merchants, or desperate women in need of rescue. After some investigation and at least one good fight they would solve the problem, get back on the ship and sail away, Kearney and Gallagher sharing a laugh and a drink at the wheel before the captain's closing log entry 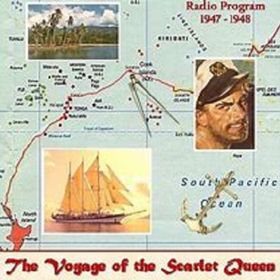