Then And Now Blading | RedCircle 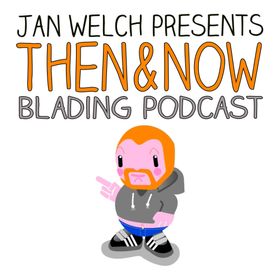 Then And Now Blading

The Then And Now Blading Podcast is an inline skating podcast created by Jan Welch and is part of his Then And Now YouTube Channel. Each episode of the Then And Now Podcast will feature interviews with people and skaters that Jan has met in his 25 years working in the rollerblading industry. During this time, Jan filmed and edited a dozen aggressive inline skating videos, founded Scum Magazine in 1995, worked for Daily Bread Magazine from 1999-2001, started Rat Tail Distribution, 4x4 Urethane, and Vicious Bearings with Jon Elliott and Brian Shima, and created bigwheelblading.com in 2017.

You can watch these podcasts as videos on the Then And Now Youtube channel. The YouTube version also features video and photo overlays relevant to the conversation to make it more documentary-style. The channel also includes The Vault, Jan's collection of raw skating footage spanning from 1995-2010. Find out more about the Podcast and YouTube channel at thenandnowblading.com.

Support Then And Now through our Patreon page.