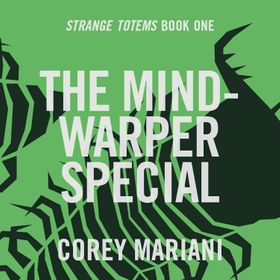 Side effects of a supernatural parasite may include the following: dry mouth, fatigue, auditory hallucinations, and the awakening of dormant magical powers likely to attract negative attention from the local secret society.

Charlie Allison is a positive guy—and ambitious. At just twenty-two, he owns his own tour-guide business and his own bus, which he’s exceedingly proud of. He spends his workdays driving tourists around the Pacific Northwest, catering, as of late, to a growing customer base: people with an uncanny interest in an old regional flood. Though Charlie doesn’t understand it, he also doesn’t like to look gift horses in the mouth . . . .

That is until one of them forces him to eat a cheese danish at gunpoint, and he wakes up a day later in a hotel room with a mysterious, crying woman. When they try to go their separate ways, they both experience excruciating pain, which means, according to the strange woman, that they are “bonded” by magic. To break the bond, they must work together to find the antidote.

But in their search, they soon discover that the havoc unleashed on their lives by their new condition is nothing compared to what the kidnappers have planned next.