The Life of Riley | RedCircle

The Life of Riley

The Life of Riley starring William Bendix as lovable, blundering, Chester A. Riley, was a radio situation comedy broadcast during and after wartime 40s. Because of its overwhelming radio popularity, Riley graduated as easily to a 1949 feature film, as it did to 1950s television. Also, in 1958, it hit the newsstands, when Dell Comics released "The Life of Riley" in comic book form.

Although "The Life of Riley" had originally begun as a proposed Groucho Marx radio series "The Flotsam Family," the sponsor balked at what would have been essentially a straight head-of-household role for the comedian. Groucho went on to host Blue Ribbon Town from 1943 to 1944 and then "You Bet Your Life" from 1947 to 1961. Producer Irving Brecher saw Bendix as taxicab company owner Tim McGuerin in Hal Roach's The McGuerins from Brooklyn (1942). "The Flotsam Family" was re-worked, with Bendix cast as blundering Chester A. Riley, a wing riveter at the fictional Cunningham Aircraft plant in California.

His frequent exclamation of indignation became one of the most famous catch phrases of the 1940s: "What a revoltin' development this is!" The radio series greatly benefited from the immense popularity of a supporting character, Digby "Digger" O'Dell (John Brown), "the friendly undertaker." 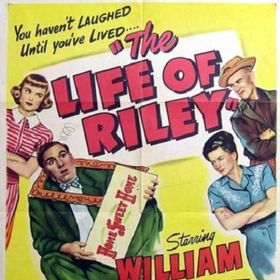