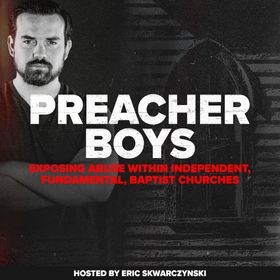 Join your host, Eric Skwarczynski, as he sits down with brave survivors who are shedding light on decades of physical, mental, and sexual abuse within the Independent Fundamental Baptist movement.

233: I Was Interrogated by Pastor Tommy McMurtry

231: Matt Chandler Steps Down Temporarily Due to "Inappropriate DMs" With Female

226: The SBC Had a Secret Abuser Database

223: Tara Skwarczynski | To Hell and Back

220: Does the Devil Wear Prada? | Andrew Pledger on the BJU Fashion Show Controversy

215: The Samaritan Woman in Light of #ChurchToo | Caryn A. Reeder

214: Travis Chappell is "Figuring it Out"

213: Jackie Chappell is "Figuring it Out"

207: #MeToo in Hollywood | How Do We Get a Harvey Weinstein?

When the Church Fails to Protect Children | Stephanie Loewen

How Are You Feeling? Raw Conversation About Mental Health w/ Archie Messersmith-Bunting

Why Are Bad People Good at Getting Power? | Dr. Brian Klaas

Don't Blow Up Your Ministry: The Underlying Issues That Take Pastors Down | Michael MacKenzie)

How to Listen to Your Body | Hillary McBride, PhD

SOLO | Why I Am No Longer a Christian

The Problem of Complacency in the Church | Carlie Cleveland

The Power of Finding Your Voice | Becky Earnhart

Disturbing Teachings on Child Discipline from the Hephzibah House Founder

How Do You Find a Good Therapist | Claire Horner, LPC

The Language of Abuse

The Minds Behind the Baptist Abuser Database | Dom & Megan Benninger

It's Time to Take the Blinders Off | Linda Kay Klein

#TommyTuesday | Responding to Tommy McMurtry's Sermon, "Confessing the Sins of the IFB"

The Power of Changing Your Mind | Andrea Stephens

"Why Do I Feel Like This?" | A Conversation About Mental Health with Peace Amadi

My Response to Pastor Tommy McMurtry of Liberty Baptist Church

The Worth of Women | Elyse Fitzpatrick & Eric Schumacher

Sex, Lies, and a Videotape | Inside Greg Neal's Ministry

Why We Silence Women Who Tell The Truth | Tiffany Bluhm

Purchase a Preacher Boys shirt, mask, sticker, or other merch to rep the show! https://www.teepublic.com/user/preacher-boys-podcast

On this episode of the Preacher Boys Podcast, Eric Skwarczynski sits down with Susan Omillian.

Susan Omilian is an attorney, author, motivational speaker and nationally recognized expert who has worked to end violence against women for the last forty years. In the 1970s, she founded a rape crisis center and, in the early 1980s, represented battered women in divorce proceedings. She also litigated sex discrimination cases, including helping to articulate the legal concept that made sexual harassment illegal in the 1990s.

Her passion and enthusiasm for this work became more personal and immediate with the violent death of her niece Maggie, killed by her ex-boyfriend in 1999. Driven by a desire to help women move on after abuse as Maggie could not, Susan developed and has facilitated since 2001 her My Avenging Angel WorkshopsTM, based on the idea that “living well is the best revenge.” These workshops have helped hundreds of women take the journey from victim to survivor to thriver.

Susan’s award-winning work has been described as “life-changing” and as “a component for women recovering from abuse that has been virtually overlooked.” On her own healing journey after the senseless death of her niece, Susan found the work she was born to do and it comes together here in the THRIVER ZONE — a healing place for women who want to reclaim their lives after abuse.

Find more stories regarding the IFB movement by visiting:

To connect with a community who share the Preacher Boys Podcast mission to expose abuse in the IFB, join the OFFICIAL Preacher Boys Facebook Group: https://www.facebook.com/groups/1403898676438188/

Support this podcast at — https://redcircle.com/preacher-boys-podcast/donations

Your Opinion is NOT Doctrine | Lane Sebring

"I Am Evidence" | Shedding Light on the Rape-Kit Backlog

The Cost of Lies | Angela Snow

A Bible and a Paddle | Naomi Osorio

Celebrating the Anniversary of the Troubled Podcast with Miranda Sullivan

"When You Get Expelled, You Find Out Who Your Real Friends Are"

2021 Vision for the Preacher Boys Podcast

An Example of Gaslighting in the Church

The Pressure of the IFB Culture

James Clidence | Why I Was Fired From Agape Boarding School

SOLO | How to Effectively Engage With Fundamentalists

Bridget Seavey | From Assault Victim to a Career in Criminal Justice

098: Are You in a Toxic Relationship? | Steven Hassan BITE Model

094: Shelly Pordea | It's Time to Speak Out About the IFB

093: SOLO | Christians Should Be on the Frontlines of Fighting Abuse

091: Erin Menchaca | "My Wounds Were Being Neglected"

090: The Right to Rights Rally at Agape Boarding School

088: Pastor Conner Smith | Leading Your Church Out of the IFB

085: Pastor Michael Poindexter | Why People Are Really Leaving the IFB

081: Drew Garcia | Becoming the Spielberg of the IFB

075: Break These Chains | Diana Winkler's Escape from the Trap of Abuse

074: The Power of Empathy ft. Will Hess (The Church Split Podcast)

066: SOLO | My Spiritual Testimony & Why I Do Preacher Boys

063: How to Support Survivors of Abuse

061: "There is No Closure" | From Faith Baptist of Wildomar to Victory Christian Academy

060: Let Me Prey On You | An Interview with Author Sandy Phillips Kirkham

058: Wolves Among Lambs | An Interview with Stacey Shiflett

055: A Serial Child Rapist in the Church & School

054: SOLO | How Predators Hide in the Church

052: Drugged, Kidnapped, and Taken to a Roloff Home | Britney Campbell

051: Turn the Other Cheek | Jonathan Tiller

Dr. Jekyll & Pastor Hyde | An Interview with the Daughter of Pastor John Koletas

"He Said I Was Demon Possessed" | Joshua Smith

“No Room for Discussion” | Carl Stine

The History and Theology of the Independent Fundamental Baptists (IFB) Pt. 1

Judged for Having a Rare Disability

Bullied by the Youth Pastor | Life Inside Fairhaven Baptist Church

How to Heal from Trauma with Jessi Beyer, Author & Mental Health Advocate

The Difficulty of Coming Forward About Sexual Abuse in the IFB

The Sin of Questioning

Punished for Questioning the Church

Cycles of Abuse at Faith Baptist Church of Wildomar, CA

How to Identify a Cult

Horrors of Hephzibah House: An Interview with Benjamin Williams

Sexual Predator in the Pulpit

Tortured by the Christian School