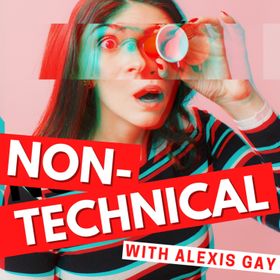 San Francisco-based comedian Alexis Gay interviews influential folks from tech, media, business and beyond about everything except their resumes. Who are the people building, funding, and running the tech companies shaping our daily lives? And like, has [INFLUENTIAL PERSON] ever kept a plant alive? Is [VERY IMPRESSIVE FOUNDER] actually afraid of the dark? What was [STALWART OF VC TWITTER] known for in high school? Tune into Non-Technical with Alexis Gay to find out.

87. Laura Behrens Wu (Founder & CEO, Shippo) is just one cat away from the danger zone

Sam Reich (CEO, CollegeHumor) has a couple tricks up his sleeve

Sahil Lavingia (CEO & Founder, Gumroad) is painting his own tree

84. Maëlle Gavet (CEO, Techstars) will go to the placemat over steak tartare

83. Eric Newcomer (Author, Newcomer) understands the importance of being earnest

76. Jason Yanowitz (Co-Founder, Blockworks) is getting fitted and going to Abilene

74. Daniel Lippman (Reporter, Politico) has a (broken) bone to pick with honeysuckles

71. Liz Fosslien (Author and Head of Content, Humu) is trailblazing the great indoors

65. Jasmine Crowe (Founder & CEO, Goodr) might be in need of some local Atlanta honey

61. Mark Cuban (Entrepreneur & Investor) has left the building on a conveyor belt

60. Lauren Berson Sugarman (Founder & CEO, Conceive) is looking on the bright side (of the road)

58. Logan Bartlett (Managing Director, Redpoint) will unfortunately have to pass on the Kiss Cam

52. Howard Lindzon (General Partner, Social Leverage) has the body of a ghostbuster

48. Andrew Yang (Entrepreneur, Former Presidential Candidate) is an adequate juggler (in this simulation, at least)

46. Joe Posnanski (Author, The Baseball 100) knows better than The Boss

44. Sahil Lavingia (CEO & Founder, Gumroad) is painting his own tree

43. Max Chafkin (Author, The Contrarian) just might get the band back together

41. Hunter Walk (Investor, Homebrew) is the weirdest of the normal

39. Bremner Morris (CEO, Rally) might be responsible for the Topo Chico shortage

38. Sheel Mohnot (Co-Founder, Better Tomorrow Ventures) is anything but a timepass

36. Ellen DaSilva (Director of Strategic Partnerships, hims & hers) is friends with your mom

35. Nuseir Yassin (Creator, Nas Daily + CEO, Nas Academy) is the MOST compelling guest of ALL TIME!!!!

34. Joe Albanese (CEO & Co-Founder, Stir) invites you to share a brain with him

32. Sam Reich (CEO, CollegeHumor) has a couple tricks up his sleeve

31. Li Jin (Founder & General Partner, Atelier) can show you where to stuff your scallions

29. Part 2 of 2: Chris Sacca (Co-Founder, Lowercarbon Capital) is the king of high-stakes roshambo

27. Kim Pham (Co-Founder, Omsom) can fold you under the table

26. Sara Dietschy (Tech YouTuber) has a PSA for Tim Cook

22. Turner Novak (Founder, Banana Capital) is the MVP of breaking your collarbone

17. Musa Tariq (CMO, GoFundMe) does NOT care how comfortable your Uggs are

13. Zak Kukoff (VC, General Catalyst) hasn’t made a dime from the French horn

11. Sara Mauskopf (CEO & Co-founder, Winnie) is NOT Most Likely to Study for the SATs After the SATs Are Over

09. Julie Zhuo (Author, The Making of a Manager) is raising a family of cheese artisans

08. Chetan Puttagunta (GP, Benchmark) knows where to get gulab jamun in Scotland

07. Adrienne Porter Felt (Dir. of Eng., Google) has a history with the Backstreet Boys

05. Megan Quinn (COO, Niantic, Inc.) knows where there be dragons

04. Terri Burns (30 Under 30, Venture Capital) is a lightning rod for bagel controversy