Let George Do It | RedCircle

Let George Do It

Let George Do It is an American radio drama series produced from 1946 to 1954 by Owen and Pauline Vinson. Bob Bailey starred as private investigator George Valentine; Olan Soule voiced the role in 1954. Don Clark directed the scripts by David Victor and Jackson Gillis. The few earliest episodes were more sitcom than private eye shows, with a studio audience providing scattered laughter. The program then changed into a suspenseful tough guy private eye series. Sponsored by Standard Oil of California, now known as Chevron, the program was broadcast on the West Coast Don Lee network of the Mutual Broadcasting System from October 18, 1946 to September 27, 1954, first on Friday evenings and then on Mondays. In its last season, transcriptions were aired in New York Wednesdays at 9:30 p.m. from January 20, 1954 to January 12, 1955. Clients came to Valentine's office after reading a newspaper that carried his classified ad: Personal notice: Danger's my stock in trade. If the job's too tough for you to handle, you've got a job for me. George Valentine. Write full details! 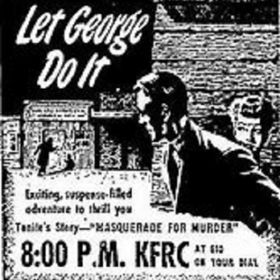