In the late 1940s, CBS chairman William S. Paley, a fan of the Philip Marlowe radio series, asked his programming chief, Hubell Robinson, to develop a hardboiled Western series, a show about a "Philip Marlowe of the Old West". Robinson instructed his West Coast CBS Vice President, Harry Ackerman, who had developed the Philip Marlowe series, to take on the task.

Ackerman and his scriptwriters, Mort Fine and David Friedkin, created an audition script called "Mark Dillon Goes to Gouge Eye" based on one of their Michael Shayne radio scripts, "The Case of the Crooked Wheel" from the summer of 1948. Two versions were recorded. The first, recorded in June 1949, was very much like a hardboiled detective series and starred Michael Rye (credited as Rye Billsbury) as Dillon; the second, recorded in July 1949, starred Straight Arrow actor Howard Culver in a more Western, lighter version of the same script. CBS liked the Culver version better, and Ackerman was told to proceed.

A complication arose, though; Culver's contract as the star of Straight Arrow would not allow him to do another Western series. The project was shelved for three years when producer Norman Macdonnell and writer John Meston discovered it while creating an adult Western series of their own.

Macdonnell and Meston wanted to create a radio Western for adults, in contrast to the prevailing juvenile fare such as The Lone Ranger and The Cisco Kid. Gunsmoke was set in Dodge City, Kansas, during the thriving cattle days of the 1870s. Dunning notes, "The show drew critical acclaim for unprecedented realism." 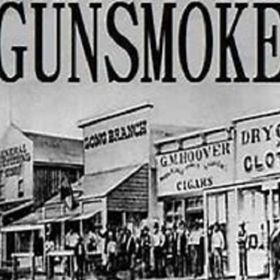