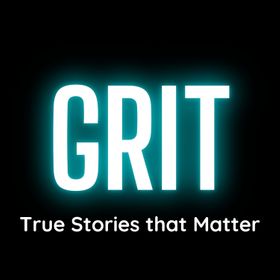 GRIT is a weekly podcast about stories (the contemporary, personal narrative kind) and the people that craft and tell them.

Why you ask? Well, we want to feature these tellers and their GRIT stories. Also, to help you - our listeners - craft and tell better, more engaging, more relatable and more memorable stories (that matter!)

New episodes are typically released on Friday mornings. If you enjoy the podcast, please consider rating, reviewing and subscribing. Thanks!

Sean Wellington is a teacher, speaker and story coach. He lives in Chapel Hill, NC (hello@storygrit.com)

Special thanks to Kurt Mullen and Mary Jo Pollack for their sublime contributions.

Two stories originally told in the summer of 2020 at 7 by 7, Grit's curated virtual storytelling series.

Support this podcast at — https://redcircle.com/grit/donations

GRIT Talks: Why do you tell (and keep telling) stories? ⭐️⭐️

GRIT Talks: What makes for a great story? ⭐️

GRIT Talks: What are your story pet peeves? 🐾

Torrey Shine Ends with Two Booms (and a Win) 💥💥

A Burst of Story by 7 Gritty Women 💥

Another Delicious Dose of the 99s...

Ready for a classic? (with teller Dr. Ray Christian)

Wait! Can you really tell a story in only 99 seconds?

Is the devil really in the details? (with teller Johanne Pelletier)

Where do we even begin? (with teller Jeremy Kredlo)

What's up with your tone? (with teller Sean Wellington)

What are you willing to include? (with teller Howard Lieberman)

How about some more 99-second stories?

Can we get personal? (with teller Ray Christian)

Do we really need to re-live our stories? (with teller Gail Thomas)

What makes a story - a story? (with teller Sara Quay)

Does hope matter in storytelling? (with teller Don Picard)

When's the right time to tell a tough story? (with teller Laura Packer)

Why does wonder matter in storytelling? (with teller Kurt Mullen!)

Is storytelling a hobby? (with teller Julie Baker)