Disciples of the Eight | RedCircle

Disciples of the Eight

Darkness. War. Chains leading to a castle in the sky. Falling.

A group of heroes awaken in an alleyway with no memory of who the others are or how they got there. They only have a deep sense of trust and the word of a stranger that they were on a mission to kill the king. They got very close but ultimately failed. Now, thanks to the actions of their strange new friend, they have another chance. The king does not know that they still live, much less that they now know where his power comes from.

Now they have to come up with a new plan and remove as much of the king’s power as possible before he realizes they are still alive. Along the way they will meet new, interesting friends and discover just how far the king has gone to preserve his own life. If they fail this time, there will be no coming back. 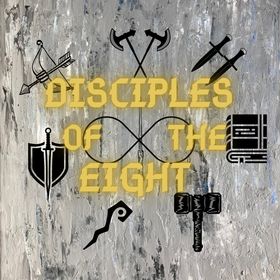 8. A Much Needed Shopping Trip

7. Words From the Eight

6. Dinner and a Spectacle

1. The Calm After the Storm

The Story So Far