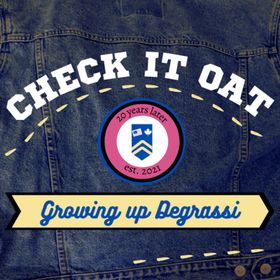 Check It Oat: Growing Up Degrassi

Degrassi is a series that has been on-air in one iteration or another since 1979. We are revisiting Degrassi: The Next Generation on its 20 year anniversary, at a time when Degrassi moments are memes, its actors are doing reunions and IG lives, and people are revisiting the series for a hit of nostalgia.

We were able to hang out and decompress from the world around us during the pandemic by revisiting the series and talking about how different things are now - but how similar the issues are - and how well (or not so well) the show tackled them.

We weren’t the only ones -- when you are a Degrassi fan, the most unexpected people might disclose to you that they are watching too. It holds such a special place in so many people’s hearts because it takes you right back to those moments of adolescence and pop culture.  We are going to start delving into the show starting with the first big episode, talking about the stories and details that have stuck with us. Plus we’ll connect with actors, creators, experts, and fans about what the series meant then and how it feels today. Degrassi’s tagline was always: “it goes there” and so will we.

So grab some poutine and a Molson Light - and get ready to CHECK IT OAT.