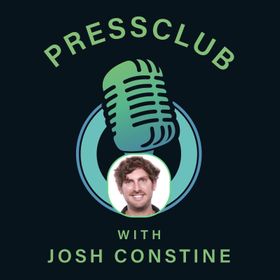 The PressClub podcast offers recordings of Josh Constine's Clubhouse show PressClub, which brings together journalists, experts, and founders to discuss tech’s top stories. Your host Josh Constine is a VC at SignalFire & ex-editor of TechCrunch where he was tech’s most cited journalist from 2016-2020. Past guests include CEOs of Instagram, Shopify, Signal, Substack, Postmates, and Craigslist.

How to harness network effects: Andrew Chen on the sociology of startups

The Future Of DAOs: How web3 reinvents collaboration

How To Beat Burnout: The 21st Century Workplace Injury

Future of Self-Driving Cars: When & how? Is Tesla Autopilot safe? With founders of Cruise, Zoox, Aurora, & Voyage plus ex-Uber & TechCrunch experts

Facebook's plans for audio with Fidji Simo, head of the Facebook app

Substack's founders on the shift from publishers to personalities

Back to offices or remote forever? CEOs of Slack, WordPress, PagerDuty on PressClub

How can people turn their passion into their profession? On this week's PressClub with your host Josh Constine, we're joined by Facebook CEO Mark Zuckerberg, Spotify CEO Daniel Ek, and Shopify CEO Tobi Lütke. We discuss why creators are essential to a resilient US economy, the impact of Apple's platform policies on small businesses and developers, and the rise of audio apps like Clubhouse. This week's artwork is a collab between PressClub and artist fnnch to create a portrait of Zuckerberg, Ek, and Lütke. You can bid on the combined NFT artwork and original painting at the Foundation auction

Future Of Newsletters with founders of Stratechery, Substack, The Information & more