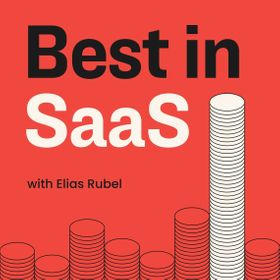 Join us as we work towards cracking the go-to-market sprint to unicorn status and beyond. In these interviews you can expect to hear B2B patterns and playbooks from some of the best revenue operators and investors in the industry. The show host, Elias Rubel, who has led two startups to acquisition as CEO and serves as a growth advisor to Dropbox, brings you along for candid discussions as he works toward his mission to turn the sprint to $100M ARR and beyond into a blueprint for other founders and operators.

Box CMO, Chris Koehler, on generalists vs specialists, and the transition to hybrid marketing

Naman Khan, CMO of Zeplin, on his approach to building and scaling marketing orgs from the ground up

Rich Taylor, VP of Operations and COS at Qualio, on approaching conversations, measuring success, and the fundamentals

Former VP of Growth at Drift and Advisor to many, Guillaume “G” Cabane, on the mashup between Economic Market Dynamics and low-cost CAC strategies

Shane Murphy-Reuter, CMO of ZoomInfo, on the importance of setting your brand vision and the ‘Miley Moment’

Amy Guarino, VP of Ironclad, on shifting perspectives and advice to her younger self

Paramita Bhattacharya, CMO of Blurb, shares on leadership and lessons learned along the way

Randy Frisch, CMO at Uberflip on how and when to think about category creation

Greg Strickland on how to be a good human, while hyper scaling in SaaS

Johanna Fagerstedt, CMO of Quinyx, shares thoughts on organizing a globally-distributed team for success amidst an uncertain climate

Jennifer Dimas, CMO at Qumu Corporation and Co-founder of Women in Revenue on blending analytical and creative aspects of marketing

Chargebee CRO Adam Tesan and the Rise of RevOps

OneLogin CMO and Co-Founder of Women in Revenue, Dayna Rothman, on building teams and a Will Smith & DJ Jazzy Jeff reunion

Skilljar CEO and Co-Founder, Sandi Lin, on her evolution as a leader and lessons learned

Co-founder and Partner of PeakSpan Capital, Matt Melymuka on patterns of success growth and failures

Kirti Dewan, VP of Marketing at BugSnag on the most successful campaigns this year and pivoting to online events

Sendoso CMO Daniel Frohnen on his team’s response to this year’s challenges and his advice for early stage companies.

What’s it like reporting to a board with Marc Andreessen and John Chambers in a board room? In this episode with Matt Singer, CMO at OpenGov, we talk about marketing GovTech, and the evolving revenue landscape post-covid.

Kevin Dorsey on Scaling Sales with Missionaries not Mercenaries

Brian Kardon, the legendary valley CMO behind InVision, Eloqua, and Lattice shares his strategy for creating alignment between sales and marketing and building a balance between product-lead growth and traditional operations

Bootstrapping to $20M ARR and beyond with Vivek Bhaskaran

From Microsoft leadership to startuplandia with Romi Mahajan

Brett Plotzker, Co-founder and Chairman at Anagram, talks about the steps he took to grow Anagram to 3 million ARR quickly and raise 17M in funding

Ahin Thomas, VP of Marketing at Backblaze, shares the unconventional ways he drives growth and why professional wrestling is America's purest form of storytelling

Rob Brewster shares lessons from the early growth trenches at Salesforce, Twilio, and Eloqua and what can be applied to startups sprinting to $10M ARR

Walter Roth of Moment Sales on how to apply an engineering mindset to sales, compassion, and truth

LeadCrunch CEO Olin Hyde on their unique pricing model and how it has helped them achieve industry-leading YoY growth.

What did it take to grow Namely from $200k to 60M+ ARR? Michael Manne breaks down the learnings and advice he now gives to folks on their revenue journey.

Alex Bilmes [VP of Growth at Puppet] reflects on the growth that led to his first exit.

Michelle Benfer, VP Sales at Hubspot, on hyperscale and creating a culture to drive revenue.

Unpacking the Psychology of Success with Mike Lindstrom

What do the sales programs at Google, Salesforce, Okta, Box, and LinkedIn all have in common? John Barrows.

4x IPOs as CMO and countless Board Seats later, Carol Meyers digs into her secret sauce for sustainable growth

Hiring 400+ sales reps in one year, and the value of continually seeking feedback.

From G2 to HelpScout, Adam Goyette talks us through his approach to high performance growth

Prolific entrepreneur and investor, Arjun Sethi on overcoming the challenges of scale

After years in the making, former HubSpot CRO, Mark Roberge unveils his new paradigm for product-market fit and the ebook to get you there

[04:39] Having the mindset of hustling and outworking everybody

[10:10] How investing in sales operations help scale the company

[12:04] Thoughts on recruiting and training people

[16:35] How to communicate to your prospects in a way that is relevant to their needs

[19:22] The regret of not having a sales mentor or business mentor

Olivier L'Abbe, former SVP of Sales at G2 on his sales leadership playbook.