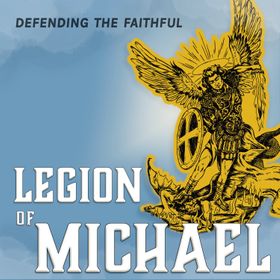 The Legion of Michael follows the example of its namesake; Michael the Archangel. The Holy Bible is filled with examples of how we should live and behave. Michael is a fighter, a righteous defender of the faith and the faithful.

During the Legion of Michael podcast, we will address ways to be bold and fearless in the face of evil. We will provide encouragement, enlightenment, and Biblical affirmation for the Christian soldier. Join us. Be bold. Be courageous. Be a defender of the faith. Visit https://www.legionofmichael.com

Trust in the Lord, Not the State

Where are you Now?

Tomatoes are a Sin?

How to Deal with Hardened Hearts

Court Rules in Favor of Pastor

Don’t Worry About What to Say

Be on the Alert

The Condition of Your Flock

It Wasn’t Raining When Noah Built the Ark

Never Again, but How?

The Reason for the Season

Where is Your Faith?

A Tale of Good vs. Evil

God is Not a New Age Parent

Luther and Subjugation to God

The Patience of a Saint

Pray for the Holy Spirit

Return to God and Reject the Disciples of Satan

Christians and the Law

The Value of Camaraderie

Checking in on your Team

Malum In Se vs Malum Prohibitum

To Worship the State

To Carry the Sword

Truly I say to you, it will be more tolerable for the land of Sodom and Gomorrah on the day of judgment, than for that city. Matt. 10:15

24Then the LORD rained brimstone and fire on Sodom and Gomorrah from the LORD out of heaven, 25and He overthrew those cities, and all the surrounding area, and all the inhabitants of the cities, and what grew on the ground. 26But [v]Lot’s wife, from behind him, looked back, and she became a pillar of salt.

27Now Abraham got up early in the morning and went to the place where he had stood before the LORD; 28and he looked down toward Sodom and Gomorrah, and toward all the land of the surrounding area; and [w]behold, he saw the smoke of the land ascended like the smoke of a [x]furnace. Gen 19:24-28

and if He condemned the cities of Sodom and Gomorrah to destruction by reducing them to ashes, having made them an example of what is coming for the ungodly; 2 Peter 2:6

Love the sinner, but hate the sin.

Satan has worked his lies throughout the world and convinced the faithful to remain silent in the face of sin and depravity.

Just because a sin is popular and sanctioned by man does not remove the evil from it.

Lord, I come before you seeking the strength and skill to overcome my enemies. Grant me I pray, the wisdom to recognize evil, the courage to confront it, and the strength to destroy it. In Jesus name I pray, amen.

Support this podcast at — https://redcircle.com/legionofmichael/exclusive-content

The Sin of Covetousness

Blind to the Truth

Be Strong and of Good Faith

Built Upon the Rock - Our Foundation

Welcome to Legion of Michael