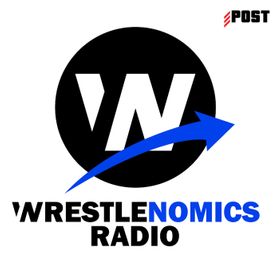 Wrestlenomics Radio focuses of the economics of the pro-wrestling industry. We discuss pro-wrestling business news and key metrics for companies like WWE, AEW NJPW, and more.

What will AEW's next TV deal be worth?

Vince McMahon NDAs and payments investigated by WWE board

Turning the corner on the possibility of WWE M&A

AEW Double or Nothing; Money in the Bank moved

The business of Wrestlemania 38

Estimating how much revenue AEW makes

Who will buy WWE's next-day rights?

New Japan back on AXS

MLW files a lawsuit against WWE

The dismantling of Triple H's NXT

David Bixenspan joins Brandon to for a special bonus episode to discuss some retrospective Wrestlenomics topics that Bix has written about recently, including WWF pay-per-view buys and the TV ratings for WWF's "Black Saturday" run on TBS, and more.

📺 Tune in to Live TV Ratings talk with Brandon Thurston every Thursday at 5:30pm ET!

A subscription to the Wrestlenomics Patreon is a must for understanding the wrestling business. Subscribers get:

Save Me by Claus Appel

Support this podcast at — https://redcircle.com/wrestlenomics-radio2532/donations

The diversity of AEW’s roster and audience

The flow of talent from AEW to WWE

The end of Ring of Honor as we know it

Fast Nationals for Smackdown and Rampage

Smackdown vs. Rampage: The 30-Minute War

CM Punk is back in pro wrestling

Week 2 with WWE back on the road

Live events are back

WWE Raw sets a new low ahead of touring

How will the return of fans affect ratings?

Double or Nothing 2021 was AEW's 2nd highest-selling PPV

What NHL on Turner means for AEW

Big ratings in the first week of the post-war era

How viewership would be affected if NXT moves to Tuesday

Welcome to the flock

No chance in hell

Cable makes wrestling richer than ever

More fans than ever

Is TV more valuable than PPV?

But all TV is down

A case for sports-like wrestling

The business of everything else

If a man yells in a forest and no one listens... is it a podcast?

We march backwards into the future

The pillars of wrestling's future

The End of Pax McMahona

The bill's coming due

The Best of WWE Excuses

Why Comcast should buy WWE

The life and times of the key demo

The scales of Moxley and Cena

Wrestling before and after COVID: Speaking Out movement, COVID19 testing

The importance of new stars

A letter to white innocence

COVID-19 Data in Florida and Japan

How WWE Network has made business harder for others

Coronavirus is a breakpoint for wrestling fandom

Will Wrestling Viewership Bounce Back?

Wrestlenomics Radio: How much will COVID-19 cost WWE?

How and Why WWE's Popularity Declined

George Barrios and Michelle Wilson out as WWE Co-Presidents

80: Wrestlenomics Radio: Impact moving to Pursuit, most matches in WWE, biggest stories of the year

66: Wrestlenomics Radio: CMLL Anniversary talk with live report from Will From Texas (goodhelmet)

65: Wrestlenomics Radio: All In economics, interview with The Ringer's Mike Piellucci

64: Wrestlenomics Radio: All In, employee/contractor issue, vision of WWE co-presidents

59: Wrestlenomics Radio: How much did WWE make from Saudi Arabia deal?

53: Wrestlenomics Radio: CM Punk victorious in court, not in UFC

50: Wrestlenomics Radio: What would a tiered WWE Network look like? SmackDown's new deal

18: Wrestlenomics Radio: David Lagana on relaunch of NWA and future of media in wrestling

3: Wrestlenomics Radio: Core of the Core